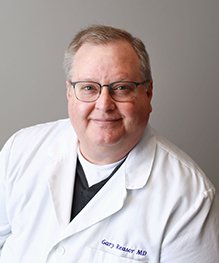 I was born in August 1955 in St. Matthews, Kentucky, and was raised in St. Matthews, Lyndon and Middletown. I graduated from Eastern High School in 1973. After working 1 year with my father, Lloyd Reasor, who was a self-employed electrician, I moved to Peru, South America, where I served a 2-year mission for the Church of Jesus Christ of Latter-Day Saints. Upon returning to Louisville, I met and married my wife, Susan, in 1977. Our son, Lloyd, was born in May 1979.

When I returned to Louisville, I returned to work for my father and completed a combined 5-year apprenticeship in heating and electrical work. Having wanted to be a physician since I was 12 years old, and with the encouragement of a family friend (Wayne Mortenson, DMD who later built Mortenson Family Dental), I enrolled in Jefferson Community College, graduating with an Associates in Science degree in 1982. I then transferred to University of Louisville and graduated with a Bachelor of Arts with high honors in 1984. I was accepted into the University of Louisville School of Medicine that same year and graduated in 1988.

Upon graduation from medical school, I was accepted into the University of Louisville’s Department of Anesthesiology, where I completed a 1-year internship and a 3-year residency. It was during my residency that I became interested in the treatment of problems of pain. Upon completion of my residency, I accepted a position with Hamilton Anesthesia Associates in Hamilton, Ohio, where I worked for 6 years. During this time, I completed the examinations necessary to become board certified not only in anesthesiology, but also in pain management. I became even more interested in pain management and started the pain treatment program at Fort Hamilton-Hughes Memorial Hospital.

In 1998, I had the opportunity to return to Louisville to go into practice with several other physicians practicing only pain medicine. This led eventually to me going into solo private practice and I started Metro Pain Associates in 2004. My areas of interest are minimally invasive spine surgery along with spinal cord stimulation and intrathecal drug delivery systems.

I have been board certified by the following organizations:

Just so you won’t think I have a narrow approach to life, I have also been involved in boy scouts, having been the scoutmaster or assistant scoutmaster of Troop 320 and completed Wood Badge training. I also served 15 years in the army reserve and was called up for Desert Shield-Desert Storm, serving at Brook Army Medical Center at Fort Sam Houston in San Antonio, Texas. Most importantly, I am a fan of baseball and have had season tickets to the Louisville Bats for many years.

With the many changes happening to medicine, it looks as if I will practice until I drop dead in my office and my epitaph will read, «If I could only have seen 1 more patient.»